We are proud to announce that Andrew has recently been awarded ‘The Halifax Civic Trust Award’ for his stunning memorial sculpture commemorating The Duke of Wellington’s Regiment.

This powerful and arresting sculpture was commissioned to commemorate over 300 years of military history. The memorial represents the Regiment’s connection to Halifax and Yorkshire and takes centre stage on the brow of the High Street in the centre of the town, home to the Regiment. 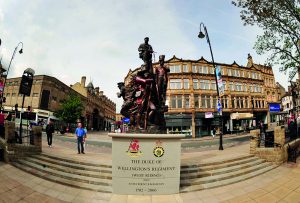 Established in 1992 the Civic Trust Awards were introduced to encourage high-quality design and craftsmanship in schemes in Halifax and the surrounding countryside. The Trust said; “Commissioning involved some clear objectives. The memorial had to be visually appealing, well-proportioned and to sit well in the chosen context”. In nominating the award for Andrew’s sculpture, the Trust acknowledged Andrew; “has accomplished the brief extraordinarily well. The memorial itself is 18ft high and incorporates all the key historical references as well as providing realistic dynamism and indeed drama. The three main figures are soldiers form the 18th, 19th and 21st centuries. The first figure is a soldier of the 33rd Regiment of Foot during the War of Spanish Succession. The second is a sergeant from 1815 at the Battle of Waterloo and the third a modern soldier standing guard over the whole piece. From the side emerges an officer from the First World War leading his men over the top. The family group at the base illustrates the connection between the Regiment and the West Riding.”

Halifax Civic Trust praised Andrew’s sculpture for being “both a lasting memorial to service and sacrifice but also a valuable addition to the townscape of Halifax, and one which will help secure the future of the town centre which has been adversely affected by the pandemic.”

It is hoped that a ceremony will take place later in the year to unveil an oval plaque which will be located on one of the wing walls beside the sculpture. 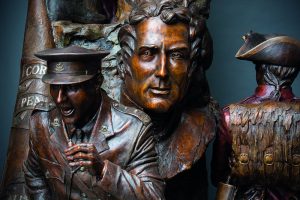 Taste of Sculpture – SOLD OUT